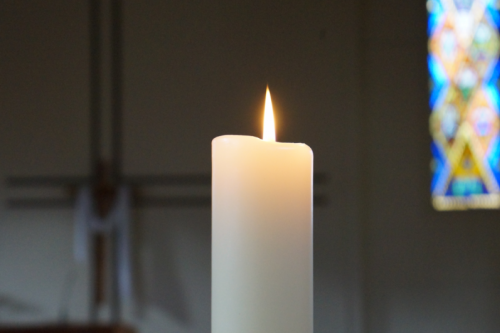 In my lectio divina, I have reading the story in Mark’s Gospel about the cure of the Gerasene demoniac. The country of the Gerasenes was on the far side of the Sea of Galilee where the pagans lived. For Jews, it was an alien place, hostile to God — much as our secular world is to us who believe. Jesus’ visit to this place can be seen as a parable on the Incarnation, when he left his Father’s house for a distant country. (C.f.: Luke 15:13; Philippians 2:5-8) On arrival we are told: ‘As he disembarked from the boat there came out to meet him from the tombs a man with an impure spirit, who had his dwelling among the tombs.’ (Mark 5:2-3) In a sense, this is us in our world: we live among the tombs, just waiting for when we, too, finally get to move in and take up permanent residence in one. “Let us eat and drink today, for tomorrow we shall be dead” (Isaiah 22:13) — this is the rule of life for those who live in such a world, where death is all that is held out. When we can’t ‘eat, drink and be merry,’ this world’s only suggestion (as it hands us a pill) is: ‘May as well pack it in now and get it over with, for what point is there in struggling on.’ (1 Corinthians 15:31-33) We can see all this in the arguments trotted out in favour of euthanasia. Our secular world really is a land of deep darkness, where sooner or later the light is switched off on us all; it is a question of when, not if. Life in this world, with no belief in Resurrection, is indeed a dark place, where the light we have is only waiting to be snuffed out. We live among the tombs, where an ‘empty tomb’ is unheard of.

Luke’s version of the Resurrection story begins: ‘On the first day of the week, while it was still very early.’ (Luke 24:1) That is, it is a new beginning; something new is dawning. (C.f.: Genesis 1) ‘They went to the tomb’ saying, “Who will roll away the stone from the door of the tomb for us?” (Mark 16:3) ‘A great gulf is firmly fixed between us and them, so that those wishing to pass to them from here cannot, nor may anyone pass from there to here,’ as Jesus was to put it elsewhere in a different context. (Luke 16:26) On arrival ‘they found the stone already rolled away from the tomb.’ (Luke 24:1-2) They are told: “Why look among the dead for someone who is alive?” (Luke 24:5) Seemingly, one who was entombed (Matthew 27:66) … has walked away from his assigned dwelling! It begs all sorts of questions: Astonished we ask, “How can it be?” (C.f.: Mark 2:12) As a new day begins to dawn in our own darkness, we ask in amazement, “Could it be that even I may not end my days here?” (C.f.: Acts 17:32)

In Matthew’s Gospel the angel who rolled away the stone is described as sitting on the stone, ‘his face like lightning, his robe white as snow.’ (Matthew 28:3. C.f.: Mark 16:5; Luke 24:4; Matthew 17:2) ‘A light shines there in the dark, that the darkness cannot overcome.’ (John 1:5) Our Easter candle, lit in the dark, is the perfect symbol for what had happened this night:

“The people who walked in darkness
have seen a great light;
those who dwelt in a land of deep darkness,
on them light has shone,”

For those dwelling in the dark, the appearance of the crucified Jesus, one who had died and was buried, was as a light shining in a dark place, a light the darkness of death could not snuff out. When Moses saw the light in the burning bush, he said, “I will turn aside to see this great sight.” (Exodus 3:3) Had he not, the story of the Israelites may have ended with them just dying out in slavery in Egypt. We can walk in the dark, without stopping to look in awe and wonder at the moon and the stars in the night (C.f.: Psalm 8:3-4), but merely go on our way endeavouring to see in the dark with the light that comes from our own torch. (C.f.: Isaiah 50:10-11) We, too, need to turn aside to look at the light that shines for us in this night, else we will remain in the dark and carry on as before till our own light goes out. We, too, are called to go to his tomb, to enter in, and see there the light that shines in the deep darkness of that ‘empty’ tomb and hear in it the angel’s voice saying to us, “He has risen; he is not here. See here is the place where they laid him,” and believe. (Mark 16:6; John 20:8. C.f.: Exodus 3:4) We are called to live in this light; it calls us to live differently — no more ‘Eat, drink and be merry, for tomorrow we die’ — for death no longer is the end. (C.f.: Romans 6:4) In so doing we draw light from this light and let it shine out in our lives as a light in the darkness of this world. To this we are called — though it is ‘so early, on this first day of the week’ (John 20:21), we are to let the new day begin to dawn … in us. (Mark 5:18-20) In a sense, while the Resurrection is Good News about Jesus, it is also the story of our own rising to new life in him, of our seeing his Light in our darkness and turning to walk in with Jesus. (Romans 6:4; Hosea 6:1-2. C.f.: Mark 1:15; John 20:11-18)

Let me give the last word to St Paul: “And why do you think I keep risking my neck in this dangerous [missionary] work? I look death in the face practically every day I live. Do you think I’d do this if I wasn’t convinced of your resurrection and mine as guaranteed by the resurrected Messiah Jesus? Do you think I was just trying to act heroic when I fought the wild beasts at Ephesus, hoping it wouldn't be the end of me? Not on your life! It’s resurrection, resurrection, always resurrection, that undergirds what I do and say, the way I live. If there’s no resurrection, “We eat, we drink, the next day we die,” and that’s all there is to it. But don’t fool yourselves. Don’t let yourselves be poisoned by this anti-resurrection loose talk — “bad company ruins good manners.” Think straight. Awaken to the holiness of life. (1 Corinthians 15:30-34 The Message Bible)