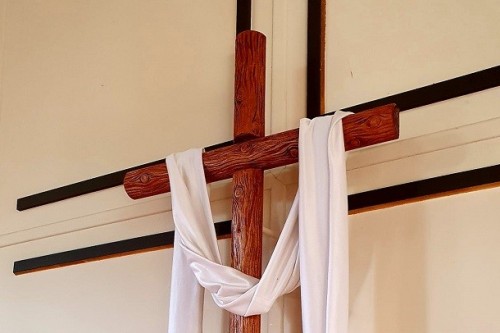 This last little while women and women’s issues have been occupying a central place on our national stage. This comes as a surprise to many of our leaders. Yet this is a matter that has been around for some time … enough time for it to get the attention even of our bishops, who have just recently convened a Consultation for Women in preparation for a National Assembly to be held later on this year, Catholic Women Gather. Following the Consultation, one bishop spoke of the ‘enriching experience of simply listening without judgement to the many and varied voices’ of women … a new experience, indeed! For even the Lord himself, back some two thousand years ago, felt the need to rebuke his disciples for not listening to the women he had sent to them to announce the Good News of his Resurrection. (Mark 16:14, 7) Since earliest times in the Christian Church, the testimony of women has been treated with, at best, incredulity: “Two whole days have gone by since it all happened,” say the two disciples on their way to Emmaus after the crucifixion, “and some women from our group have astounded us: they went to the tomb in the early morning, and when they did not find the body, they came back to tell us they had seen a vision of angels who declared he was alive.” (Luke 24:21-23) So, let us avail ourselves of this ‘enriching experience of listening to women without judgement’ as we ponder this morning’s Gospel, for it is a story about women and their experience.

“When the Sabbath was past, Mary Magdalene, Mary the mother of James, and Salome bought spices, so that they might go and anoint him.” (Mark 16:1) They came to anoint him: Jesus had to be buried quickly late on the eve of the Sabbath, when no works may be performed, and so they went with spices as soon as they could afterwards, to perfume a decaying corpse. This act of devotion was a way, however inadequate, to bring some kind of closure to what was a tragic drama. This is the third time these women were named (Mark 15:40, 47; 16:1); there is no doubting whose testimony this is — they are: Mary Magdalene, Mary the mother of James, and Salome. These are the women who ‘watched from a distance’ as they crucified Jesus (his male disciples were notably absent, last seen fleeing when they arrested him (Mark 14:52); they had been with him since ‘he was in Galilee.’ (Mark 15:40-41) Two of them ‘saw’ and ‘took note’ of where they buried him. (Mark 15:47) ‘They came to the tomb just as the sun was rising’ (Mark 16:2) — it wasn’t dark; they didn’t get it wrong; it was Jesus’ tomb. As they walked along, they wondered, “Who will roll away the stone for us from the entrance to the tomb?” (Mark 16:3) — they were worried about practical things. They had brought spices; they came with purpose. This does not sound like people on the edge of hysteria, but rather more like those on a mission, who have a task to do. When they arrived, ‘they saw the stone — which was very big (it wouldn’t just roll by itself) — had already been rolled back.’ (Mark 16:4) Problem solved … but it does leave unanswered the question: Who did roll it back? The implication is that God did, and so in some senses, this is the first sign of Resurrection, a sign which is entirely of God’s doing. In this sign there is no human agency; theirs is only to witness.

They went in and ‘saw a young man sitting on the right side, dressed in a white robe, and they were alarmed.’ (Mark 16:5) It is worth keeping in mind that group hallucinations are virtually unknown. The women were ‘alarmed.’ The word used here for their response includes a combination of fear and wonder, astonishment and distress. It is also the word used of Jesus when he was in Gethesmane: ‘A sudden fear came over him, and great distress,’ says St Mark. (Mark 14:33) This is not the kind of word one would use to describe a purely human encounter. These women describe an encounter that amazed them, astonished them, and yet at the same time alarmed them, made them fearful. Their response indicates an encounter of a different order. Elsewhere ‘a young man dressed in white’ is biblical speak for a heavenly being. (Luke 24:4; 2 Maccabees 3:26, 33) St Matthew calls the heavenly being an ‘angel,’ that is, a messenger … and this is his role here. (Matthew 28:2, 5) That this young man was ‘seated on the right side’ is a gratuitous piece of information, and not the kind of thing a whole group would think to include nor to remember so exactly in a description of an angelic encounter. (C.f.: Daniel 13:51ff) Its inclusion favours a historical remembrance. Addressing their reaction, the young man says, “Do not be afraid.” Addressing their purpose, he says, “You are seeking Jesus of Nazareth, who was crucified.’ (Mark 16:6) This word ‘seeking’ is used ten times in Mark, and generally with a negative connotation. (Mark 1:32; 3:32; 8:11, 12; 11:18; 12:12; 14:1, 11, 55) So here, there is a mild rebuke for these women: You are seeking only a dead man. (C.f.: Luke 24:5) For they were intent only on a funeral errand and were wholly caught up in death. What occurred here is something outside even their wildest expectations.

The young man says to them, “He has been raised; he is not here. See the place where they laid him.” (Mark 16:6) This is the Good News, first preached here in an empty tomb. Whatever of the mechanics of their encounter, this is its content: “He is not here.” This is an experience of coming to know where he is (c.f.: Acts 9:3ff; ): “He has been raised” — and of which the vacant space where he had been laid becomes another sign of Resurrection. (C.f. 2 Kings 2:16-18) These two signs, the rolled away stone and the empty place where he lay (c.f.: Mark 1:35-36), in themselves are not proofs of Resurrection, for by themselves they do not convince (Luke 24:24); they are but signs. Ultimately, theirs is an experience of being sent, of being commissioned, of being empowered: “Go, tell his disciples and Peter, ‘He is going before you to Galilee. There you will see him, just as he told you’.” (Mark 16:7. C.f.: Acts 2:4ff) Theirs is an experience of Spirit of Christ coming upon them. (C.f. John 20:21-22; 2 Kings 2:15)

So, what are we to do with this experience of these women? Do we do as the Church has more usually done with women’s experience? These women told their story to the apostles … ‘but this story of theirs seemed pure nonsense, and they did not believe them,’ says St Luke. (Luke 24:11. C.f.: Mark 16:11) Or do we try a newer, more enriching way of ‘simply listening without judgement to the voices of these women,’ of opening ourselves to their experience … that perhaps that same Spirit that came upon them may come upon us, that we, too, might likewise be empowered to go out courageously in faith? (2 Corinthians 4:13; 1 Corinthians 12:8-11)

On behalf of the community, I pray that every Easter blessing may come upon you, and may you rejoice in the Good News: He has been raised!

By Dom Steele Hartmann OCSO
« Back