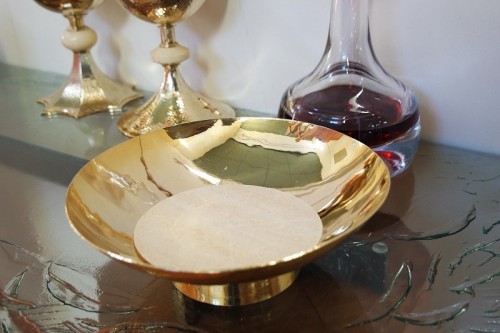 “And he got up from table, removed his outer garments and, taking a towel, wrapped it round his waist; he then poured water into a basin and began to wash the disciples’ feet and to wipe them with the towel he was wearing.’ (John 13:4-5) Here we have a parable about Incarnation. For, as the Letter to the Philippians has it: ‘Though he was in the form of God, he did not count equality with God a thing to be grasped, but emptied himself, by taking the form of a servant.’ (Philippians 2:6-7) This self-emptying of the eternal Son/Word reaches its climax on the Cross. Thus, ‘though he was in the form of God … he emptied himself by taking on the form of a servant’ parallels Paul’s observation: ‘And, having become as all humans are, he was humbler yet, even to accepting death, death on a cross.’ (Philippians 2:8) On the Cross his self-emptying was to be complete, final, total. Peter and the other disciples were shocked by what Jesus was doing in washing their feet: “Lord, do you mean to wash my feet? … Never! You shall never wash my feet.” (John 13:6, 8) They are to be totally appalled by his shameful end, by the hideous ignominy of his Cross. They did not understand what he was doing in washing their feet; they will be left totally bereft by his death: “Our own hope had been that he would be the one.” (John 13:7; Luke 24:19-21) Left to ourselves, we cannot hope to understand the Incarnation; it makes no sense. (1 Corinthians 1:23)

A small clue can be got from the remark: ‘The Devil had already put it into the heart of Judas Iscariot, Simon's son, to betray him.’ (John 13:2) The Devil and Judas are now joined in a conspiracy to bring Jesus to the Cross. The passage continues: ‘Jesus knew that the Father had put everything into his hands, and that he had come from God.’ (John 13:3) Here we have Jesus once again being ‘driven’ to wrestle with Satan, in the person of Judas: ‘Jesus knew that his hour had come.’ (Mark 1:13; Luke 4:1-13; John 13:1) But here we have a great power imbalance: one who comes from God verses one who comes from the Devil. Why, we might ask, does Jesus not just defeat the Devil by devastating Judas with a blast of Divine wrath — before he can carry out his plan? Instead Jesus just washes the disciples’ feet, including Judas. To us and to all who would ask such a question Jesus replies, as he did to Simon Peter: “The way you think is not God’s way but man’s.” (Matthew 16:23) In his washing their feet he is saying again to them: “You know that the rulers of the Gentiles lord it over them, and their great ones exercise authority over them. It shall not be so among you. But whoever would be great among you must be your servant, and whoever would be first among you must be your slave, even as the Son of Man came not to be served but to serve, and to give his life as a ransom for many.” (Matthew 20:25-26) So Jesus goes on to say to them after he washes their feet, “I have given you an example that you may copy.” (John 13:15) In our struggles with our enemies/The Enemy, the use of power to win the battle is not the way, is not God’s way.

When Jesus goes to wash Peter’s feet and Peter refuses, Jesus says to him, “If I do not wash you, you have no share with me.” ‘Share’ is to do with inheritance — as in the Prodigal Son who says to his father, “Let me have the share of the estate that would come to me.” (Luke 15:12) It was probably only Jesus who grasped that the foot washing was a foreshadowing of his death on the Cross: “What I am doing you do not understand now, but afterward you will understand.” (John 13:7. C.f.: Mark 4:13) But here Peter understood enough (he does not want to lose his share) for him to say in his characteristically unrestrained way: “Lord, not my feet only but also my hands and my head.” (John 13:9) Jesus replies, “No one who has taken a bath needs washing; he is clean all over.” (John 13:10) Jesus is performing a symbolic act that is to do with cleansing. And so here the link to Calvary becomes clearer. For Jesus is “the Lamb of God that takes away the sins of the world,” as John the Baptist put it (John 1:29); and, as the Book of Revelation puts it of those who are saved by what Jesus did on Calvary: ‘They have washed their robes and made them white in the blood of the Lamb.’ (Revelation 7:14)

The foot washing here tonight is symbolic of the cleansing that Jesus will do tomorrow. In the Farewell Discourse that follows, Jesus will say to the disciples, “A person can have no greater love than to lay down his life for his friends.” (John 15:13) What Jesus did on the Cross in washing us clean by ‘passing from this world’ was to manifest the great love God has for the world: ‘God loved the world so much that he gave his only Son.’ (John 13:1; 3:16) Tonight’s Gospel tells us: ‘He had always loved those who were his own in the world, but now he showed how perfect his love was.’ (John 13:1) The foot washing here is not so much an act of humility — as if he were saying to Peter who was refusing to let him wash his feet: “I command you to let me be humble and let me wash your feet — or you’re out.” Rather, it is to be seen as an act of love (great love even, for Peter’s indignant outrage reveals just how shocking a thing it is, in the world of that time, that Jesus was doing) in which he is saying, “There is nothing I will not do for you; I will even slave for you.” And so, in this regard too, his great love manifested in such menial service betokens what he will do for us tomorrow.

So, when Jesus says to us, “I have given you an example, that you also should do just as I have done to you” (John 13:15), he doesn’t mean that we are to literally wash each other’s feet, though I have just done so to you. Rather it is his example of extraordinary and great love that we are to emulate — as he will later put it: “A new commandment I give to you, that you love one another: just as I have loved you, you also are to love one another.” (John 13:34-35) This should give us new ears to hear what Benedict is saying to us in his Chapter on The Good Zeal that Monks Ought to Have: ‘Let them strive to be the first to honour one another. They should bear each other’s weaknesses of both body and character with the utmost patience. They must compete with one another in obedience. No one should pursue what he judges advantageous to himself, but rather what benefits others. They must show selfless love to the brothers.’ (Rule of St Benedict 72:4-8) This is how we can fulfil his commandment and manifest Christ’s shameless love for us. For nothing is ruled out here: “There is nothing I will not do for you; I will even slave for you.” In our living together, in all the things we do for one another and in all the things we are asked to do for another, we must try to follow his example, by doing it all in such a way as to manifest God’s great love for us. For this is how Christ loved us.

Going back to thoughts about Incarnation that I started with: using the example of foot washing, the Incarnation does not mean that the Word of God exchanged the form of God for the form of a servant, but that he so put on our flesh and went so open-eyed to the Cross that his deity was revealed in our flesh … in his moment of greatest weakness, greatest service. (C.f.: Isaiah 52:13ff) This is what he wants us to do (C.f. Genesis 1:26), and he has shown us how: “You know that the rulers of the Gentiles lord it over them, and their great ones exercise authority over them. It shall not be so among you. But whoever would be great among you must be your servant, and whoever would be first among you must be your slave, even as the Son of Man came not to be served but to serve, and to give his life as a ransom for many.” The challenge for us today is: How do we do this … in these COVID-19 days of isolation and social distancing.